Installation, part of my exhibition Doubledipper 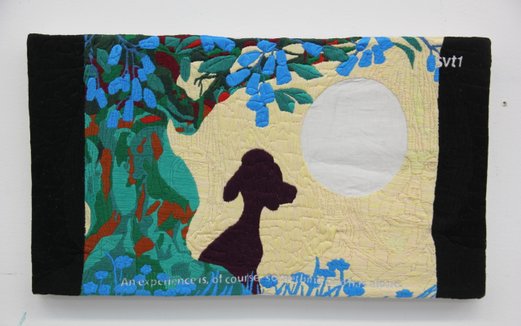 An experience is, of course, something one has alone,

My mom doesn't like buying new stuff, so when our TV broke, she was really happy about the new one my sister got us. It was a flat screen, our family's first, and it had been used as a menu display at our local food court. The TV worked fine for a while but then the dot appeared. It grew quite rapidly until it stopped one day, and the shape and size stabilized to the one we grew accustomed to watching for the next couple of years.

It was our only TV, and me, my sister and mom would watch all our favorite shows partly obscured by the dot. But that was all right, we knew perfectly well the angular shape of Ridge Forrester's clenched jaws, where the goal was when Zlatan fired his shot, and that what Ferdinand was smelling were flowers. We filled in the blanks. The human mind is great that way. I also knew that my mom loved me, even though she never told me. That it hurt that she didn't get an education. That she was sad to see me drop out of school at an even earlier age than she did, to do nothing all day but watch the TV. We never talked about that kind of stuff but we talked about what was on the TV and in between our commenting I filled out the blanks. The TV acted like a sort of mirror or transit station and it helped us communicate.

When I got accepted to the art academy, my mom wasn't very enthusiastic. It made me sad. I imagined my class mates parents being happy for them. But as time has passed I feel as though she has learned to accept my career choice, and I believe she is proud of me for getting the education she never had, even though she has never told me so.

Time seemed to fly away, watching that old TV, and, after a while, me and my sister moved out. Someone gave my mom a new used TV, and whenever we visit, the TV is still always turned on, full blast, and we sit in front of it, talking, filling in the blanks.